The scorching sun rays burnt the green; but for the green, it is not difficult to bounce back in the garden city of India. The sprinkle of rain drops in the city made people get mesmerized in the cool breeze to put an end to fuming hot summer.

After end of summer;  one of my colleagues made an observation about increased food waste. The observation made me think, and I came to conclusion that it is confined to my working place. We used to put the remaining food in one rectangular tray; and, keep it outside our canteen on the terrace of the building.  The food in the tray was utilized by a herd of pigeons; which started using the food in the tray to fulfill their energy needs.

But, the rain made pigeons disappear from our office premises and the food we kept in a tray in the last week became wasted. For my personal interest I searched facts about food wastage; to find some astonishing facts which are listed below.

The food intended for human usage if discarded without consumption is called food wastage.

On an average, each human wastes 100kg of food each year.

In developed countries, most of the food is wasted at consumption stage.

The global wastage of food per year crosses 1.3 billion tonnes.

I find people leaving food in plates; especially, when they visit bigger restaurants. It’s really difficult to say the reason behind; but, one can suspect;  does it look prestigious for them to leave part of food in the plate. Is it the hotel to be blamed for not making food tasty or for giving more quantity; since, they charge more on food.

I recall one of my friends who was an employee in TCS. I never saw him wasting food from the day I saw him. I saw him eating food irrespective of the place, taste and sometimes even the quality; because his sole motto was not to waste the food.

These facts made me to scribble a while to recall a few incidents I  experienced and heard of.
I was studying high school, getting scolded for not concentrating on studies was quite common for me. One day, I was pretty hungry; and filled plate full of rice and relish-able curry prepared by my mother. I switched on the television and changed the channel.  The rest was predictable, my mom scolded me which irked me a lot. I wash my hand in the plate full of rice and walked away. She called me and asked the reason for not eating food. I flung on her by saying “Not Hungry” and went away.

After fifteen minutes When I came back home, my father called me and showed me the plate full of rice in which I washed my hand. He rebuked me and made me eat the same rice. Then my parents explained me the importance of rice.

In India, Parents teach their children, sometimes by scaring. One thing that most parents say to their child is “Don’t waste food” and they scare them by saying they will tie the wasted food on the child’s head.

My old roommate used to weep whenever he eats lemon rice; especially if it is towards the fag end of the month. He used to praise his mother for preparing lemon rice for the breakfast form the previous night’s left over rice.

One of my acquaintances told that her mother used to give water mixed with chili powder and salt as combination with rice, idly, dosa, roti; instead of preparing tasty curry. She told it was the punishment if they waste the food.

In one or the other way our elders teach us the importance of food. But still food wastage is a never ending problem. 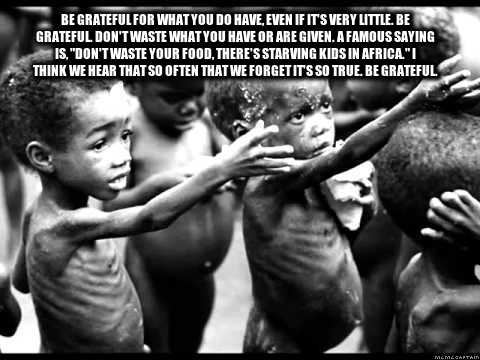