8 significance's of Sankranti to feel proud to celebrate this festival 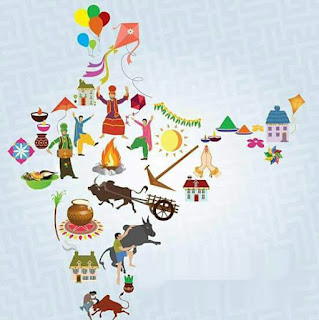 Hinduism is not just a religion but it’s a way of life. Many might question how the religion that teaches worsh

ipping an infinite number of gods in the form of lifeless idols can be a way of life.

Worshipping many gods is a metaphor for worshipping different forms of nature. Hinduism believes in absolute equality and respect every other form of life. Hinduism tells the way of leading life according to time, climate and emotions.

One such beautiful celebration that comes in the month of January is Sankranti. Below are the reasons to justify “Why Sankranti is one of the most important festivals of the year”.

1      1. Worshipping significance of change in nature

Festival is all about worshipping Sun and celebrating the beginning of long days. Festival signifies the end of winter season and dawn of the summer season, which is important with respect to agriculture- the main occupation in India. On the day of Sankranti Sun leave Dakshinayana and enter Uttarayana that lasts for 6 months. Uttarayana means celestial revolving of earth towards north direction. This is a very important phenomenon with respect to year’s harvest cycle.

Sankranti is very important, as it is also the festival of celebrating the growth of Rabi crops. Usually, farmers rotate the kind of crops grown Kharififf and Rabi harvest season. In one season, they grow monocots and dicot in the other. This is a period where the farmers grow vegetables in abundant.

India is a land of temperate climate. We love coziness more than the wind and cold. Sankranti brings a lot of Happiness, as it brings the end to the winter (except for newly married couples). People start planning pilgrimages, which are majorly  located in the cold areas.

Winter is a trouble period in India, as cold slow down the metabolism process. Indians cannot afford heavy food during winter. Cases of flu, pneumonia and respiratory diseases are quite common. Skin loses Moisture, in-digestion iwill be a spot of bother for many Indians. Sankranti puts a full stop for all these imbalances. It is the best period in the year , in India for humans to break their diet and have as many as they can. As a start, Sankranti festival begins with high lipid cereals like sesame, dry coconut, and groundnut and so on. These foods gives balance to the body and increases activeness and bring back the moisture in the skin to increase your charm.

5.One festival many names

India is the most tolerant country. Tolerance is in every heartbeat of the Indians.  It is even portrayed in Indian constitution as a fundamental prospective of Indians. Sankranti is a perfect example of this perspective. It is celebrated throughout the country but with their own provisional nomenclature.
In Andhra Pradesh  and Telangana ,it is called as Bhogi and Makara Sankranti. In Karnataka, it is celebrated as Sankranti or Sankramana. In Tamilnadu and Kerala it is celebrated as Pongal.
In Assam, It is celebrated as Magha Bihu. In Bihar It is Sankranti or Sakraat. In Gujrat it is Uttarayan, Sankrati In Rajasthan, Lohrii in Punjab, Pahari in Himachal Pradesh and many names exists in every province for the same province.

Kite festival is celebrated in many states of India and most prominently in  Gujrat. Bull fighting, goat fighting, rooster fights are commonly seen in many villages.  Few States arrange crackers shows and special kite lights in the night, which is treat to watch. Bhangra dance in Punjab, Pot breaking in Assam are mesmerizing show of class and quality of celebration of the festival.

People worship land, Animals, field crops, trees, rivers, mountains and entire environment for its glory and request every aspect of nature to bestow peace in life.

Harmony and peace lies in every family on this occasion. People exchange sweets along with sour pulses to signify their co-operation in happiness as well as bad times. In many states people invite their friends and relatives for home. Few of them arrange mass food fares to elevate the harmony between communities. In Haryana, they observe a special tradition Called “Sidha”. Sidha is observed by few communities in Haryana, Punjab and Delhi. Brothers visit their sister’s place and give the gifts to their in-laws and perform celebration as a metaphor of giving happiness to their sisters and in-laws.

India is a land of festivals, pomp and celebration. Sankranti is one of the many beautiful celebration. With its high significance, Indians should be proud of themselves to celebrate highly scientific festivals like Sankranti.